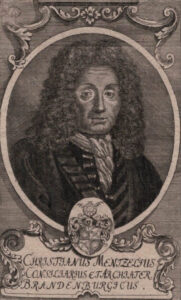 The planned conference on the occasion of his 400th birthday by honorary scientists and historians from Berlin/Brandenburg pays new tribute to the life and work of Christian Mentzel, in particular:

As the 57th member of the oldest German Academy of Natural Scientists Leopoldina, Christian Mentzel also contributed to the development of scientific standards and the profiling of the first European scientific journal “Miscellanea curiosa” since 1675.

He had lively scientific exchanges with great scholars of his time – such as G.W. Leibniz.

The first cultural-historical colloquium of the 21st century on the occasion of Mentzel’s 400th birthday, based on the already published biography of a collective of authors under the title “Christian Mentzel (1622-1701) – Leibarzt des Großen Kurfürsten, Botaniker und Sinologe” (Christian Mentzel (1622-1701) – personal physician of the Great Elector, botanist and sinologist), is to provide a broader view of Mentzel and the Renaissance in the 17th century and, from a sinological point of view, lead to the establishment of an innovation cluster China in LOS.

The Christian Mentzel author team has been working since 2019 on the rediscovery of the unjustly forgotten great 17th century Fürstenwalde and Berlin scholar Christian Mentzel (1622-1701). The following projects are the focus:

Further project ideas are in the works and welcome.